Does CoolSculpting® Work for Men?

Women aren’t the only ones who want to look great. Fat deposits on men that don’t respond to workouts can be frustrating. If you’re a man who wants to look leaner and fitter, you should schedule a visit with us at The Skin Center by Charlotte Plastic Surgery to find out the answer to the question of does CoolSculpting® work for men like you?

CoolSculpting® is a technology that uses cold temperatures to freeze fat cells. It originated from its creators, Drs. Manstein and Anderson of Harvard University, watching children eating frozen ice pops. They realized that different cell types had varying responses to cold temperature. They researched this field to eventually create the Cryolipolysis process.

This process is how the CoolSculpting® system removes up to 20% to 25% of fat from targeted sites on the body. During an initial consultation, patients outline a customized plan for where to remove fat, how many treatments they need, and the number of sessions to complete those treatments. This consultation is also when a trained expert in using CoolSculpting® can tell you if you are a good candidate for getting the results you want from this process.

Does CoolSculpting® Work for Men?

The only difference between men and women choosing this fat reduction method may be the sites they want to be targeted. Some women feel more concerned about fat deposits around their outer thighs, whereas men may need abdominal treatment. However, anyone can get treated in any of the nine locations the FDA cleared this method for use. 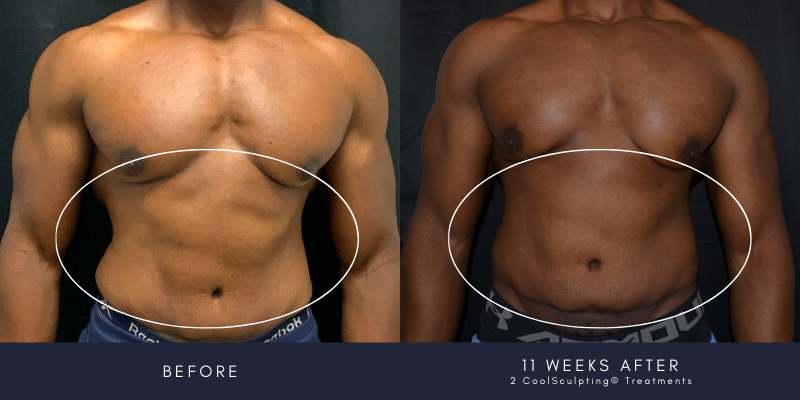 What Areas Can CoolSculpting® Treat on Men?

The CoolSculpting® process can work for men on nine parts of the body. Starting with the head, technicians can reduce fat under the chin and under the jaw. This type of procedure can make your face look leaner, possibly giving you a younger appearance.

For the torso, CoolSculpting® technicians can treat one of several areas during a session. If you need more than one spot treated, ask about the CoolSculpting® Elite system or consider extending the session time to allow for multiple treatment sites. On this portion of the body, you can have fat reduced from your upper back, love handles, upper arms, and abdomen.

Getting more crunches isn’t keeping you from showing off your abs. It’s the fat in front of the abdominal muscles that is hiding your six-pack. Reducing the fat could put you in a better position to show off a leaner physique. The same principle holds true for other parts of your body. If you want a leaner look, you may have enough muscle built up but need fat reduction to show off those muscles.

CoolSculpting® can also treat the legs. While you still shouldn’t skip leg day, by removing excess fat from your outer thighs, inner thighs, top of the thighs near the knee, and under the buttocks, you can improve your overall appearance and make your exercise efforts more visible.

How Does CoolSculpting® Work for Men? What Is Technology?

The patented technology used for the CoolSculpting® process is known as Cryolipolysis, which refers to freezing fat cells while preserving other local tissue. This process works because the creators noted that fat cells freeze at temperatures above those that would damage muscle tissue, skin, or organs. By precisely delivering temperatures in the range that kill fat cells, the CoolSculpting® process reduces fat without harming the rest of the body.

In both men and women, the treatment applicators direct cold temperatures to specific areas of the body. These target sites have their fat cells frozen, which eventually die. Once the fat cells have died, the immune system sends cytokines and other inflammatory cells. These cells digest the fat cells, releasing the lipids into the body.

Lipids are the source of fuel when you eat dietary fats, so your body naturally uses them for energy. However, because the process of digesting the dead fat cells takes time, the release of lipids into the blood takes place over time. Therefore, patients who have had CoolSculpting® don’t have a rise in their blood lipid levels or have the lipid release negatively impact their liver function.

Additionally, since the process of removing the dead fat cells from the body takes time, the results typically take one to three months to appear. However, they can last for nine years or more.

Who Is a Good CoolSculpting® Candidate?

Anyone with stubborn areas of fat that a healthy diet and regular exercise cannot seem to reduce may see benefits from cosmetic treatments for men. Generally, the best candidates have a healthy weight and don’t need assistance with weight loss. They only have a few places of stubborn fat deposits they want to have reduced with a cosmetic procedure. Most people who choose CoolSculpting® don’t want to undergo a surgical liposuction procedure for fat removal.

However, the only way to tell if you are a good candidate for CoolSculpting® is through a personalized consultation with an expert trained in the technology. You should always discuss all medical conditions you have with the consultant because some conditions, especially those triggered by cold, may prevent you from using the CoolSculpting® system.

Men can benefit from CoolSculpting® the same way women can and see results in just a few weeks. So, does CoolSculpting® work for men? Yes, but you need to schedule a consultation to get personalized advice for whether CoolSculpting® will work best for you and how many treatments you need. Contact us at The Skin Center by Charlotte Plastic Surgery to set up your appointment today.


TagsCoolSculptingdoes CoolSculpting® work for men
PreviousPrevious post:Our Top BOTOX® Myths and Facts
NextNext post:Want to get your CoolSculpting® Elite Results Faster? Here’s How:
BACK TO BLOG